I know the intro blurb says I’m not going to explore the roots of the issue, but it doesn’t say anything about wild speculation. I like to think that the SSR made a lot of sense.

“We can’t just style all our pickups like that though. It would be a huge risk. We should make it lower volume.”

“To save some money, why don’t we put it on the GMT360 platform. We already make like eleven other cars on that platform.”

“But the GMT platform is not sturdy enough for a real pickup… So it cant be like, an actual truck. What if its more of a street machine, like a lowered truck?”

“If we’re making a lowered street machine, maybe we can attract some Corvette buyers and weekenders if it’s a convertible. A hard top convertible, though. Has to look like a regular truck.”

“Right, and we already put a few V8s in cars on this platform, so why not have a V8?”

“So we’re making a retro-styled, convertible, pickup truck sports car, on the GMT360 platform, with a V8.

The Red Headed Stepchild of the GMT360 Family

The GMT360 platform is actually a little wider in scope than I first let on. Really, it’s not seven cars. It’s twelve. If you include the SSR, and the Isuzu Ascender’s seven passenger variant, the GMC Envoy XL, the GMC Envoy XUV (the weird looking one), and the Chevy Trailblazer EXT, it’s a full dozen.

The SSR’s underpinnings are most closely related to the seven passenger SUV category of this platform, GMT370. However, it gets it’s own moniker–GMT368.

When it was released, the SSR had a 5.3 liter LM4, the same engine available as an option in regular GMT360 platform cars. The only transmission available was a four-speed automatic, and out back was a Torsen LSD. Working in together, they could propel the SSR to sixty miles-per-hour in a brisk… seven seconds. The culprit here is the curb weight–nearly 4800 pounds. The front suspension was independent, as is with other vehicles on this platform, and the rear end was a five-link solid axle arrangement.

Magazines at the time compared the lackluster performance of the SSR to the Plymouth Prowler, which only received a paltry V6. However, in 2005 the SSR got the 6.0 liter V8 out of the Corvette. Coming along for the ride as well was a six-speed manual transmission.  After these performance upgrades, the SSR could rocket to sixty in around 5.5 seconds, keeping up with smaller sports cars of the era like the S2000 and 350Z.

Performance aside, the SSR had different sized wheels front and back similar to the STS-V. 19s in the front and 20s in the rear. Of course, there was a chrome wheel option. It was available in several colors; Ultra Violet Metallic (a dark blue color), Aqua Blue, Pacific Blue, ‘Smokin Asphalt (black), Slingshot Yellow, Ricochet Silver Metallic, and RedLine Red. They also made them in…*sigh* two tone.

Somebody on ‘SSRfanatic.com’ who’s caps lock must have been stuck on complied all of these colors, and their production numbers.

You will notice several of these color combinations had very low production numbers, the second rarest being Ricochet Silver over Pacific Blue, at just seven produced. I did a little research, and found an article about the owner of one of these cars. Here is the whole article if you would like to read it, but I will list some highlights below.

Here is a picture of the owner. No surprises here.

“He explained that he had hoped to buy a 2007 SSR, which had been slated by GM as the original final year of planned production. There were also plans to enhance the front and rear fascias for 2007 and rumors persisted than an optional 505-horsepower supercharged (Z06) LS engine was also in play.” (I did not know this, nor do I know if it’s true).

“Once I learned that 2006 would be the final year for the SSR, I had to order one right away. So, in 2006 several new options were introduced: Pacific Blue paint, a full chrome package and an optional two-tone paint, all of which I ordered,”

“As for the SSR, under the hood are special graphics and paint by noted area specialist Don “Mitch” Mitchell, from Waverly, New York. The custom underhood paint really makes the SSR a car-and-truck-show standout… In addition to the underhood custom paint, a special rear spoiler from a Chevy Cobalt sedan painted by Mitch and installed by Mareck gives the SSR a one-of-a-kind look.” 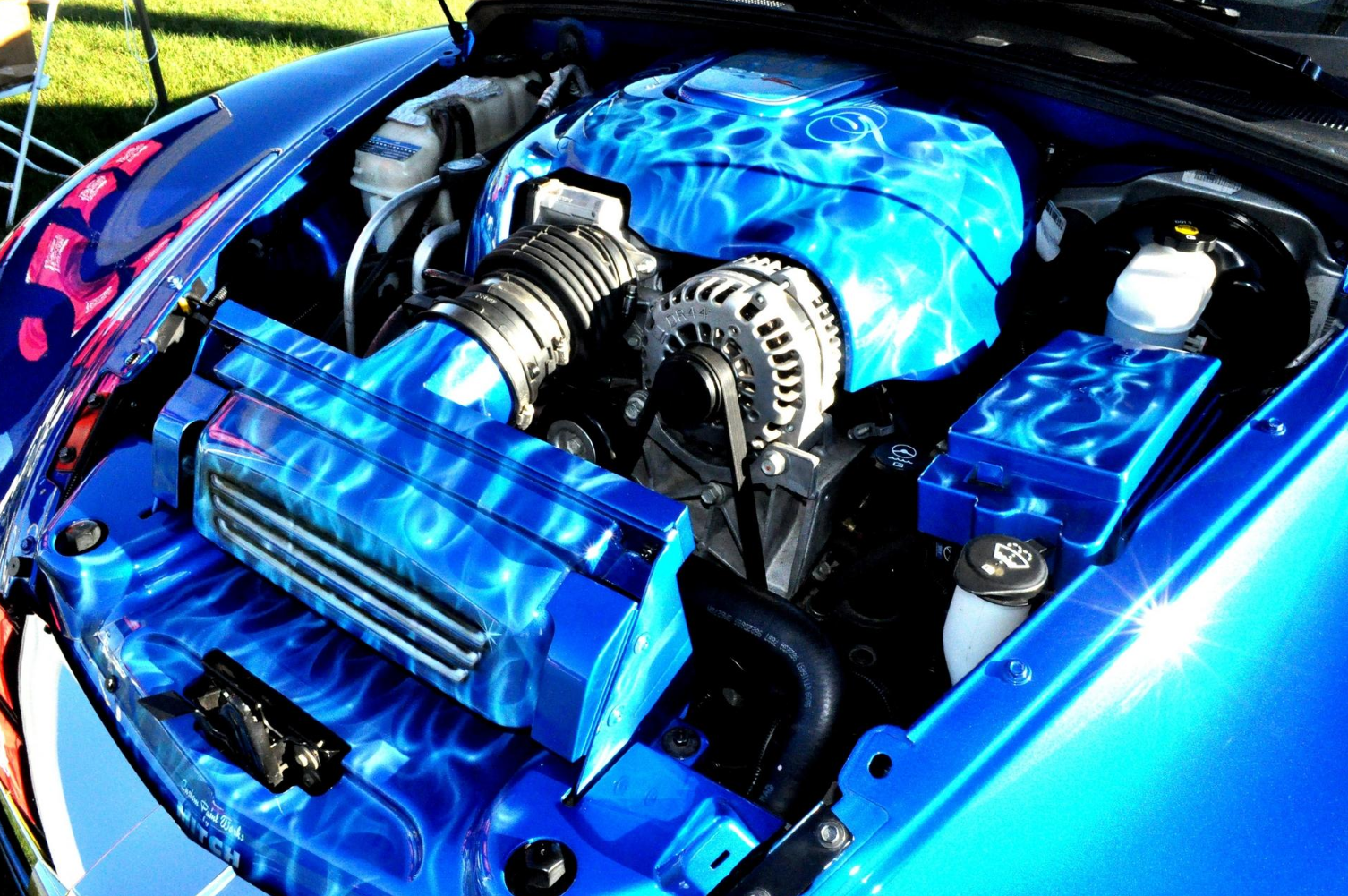 “For a finishing touch, Mareck added special, mirror polish high quality wheels from Complete Custom Wheels in Daytona Beach, Florida, for a final motif enhancement. The custom wheels replaced the stock ultra silver painted wheels his SSR came with and they are proper size 19-inch front and 20-inch rear dimensions. When all is combined, his SSR is a major attraction and attention getter both at shows and while traveling up and down the highway.”

You just knew the owners of these cars were gonna be like this. I really like how the engine cover is the same color as the exterior, which means the item that stands out the most inside the engine bay is the alternator. Really great stuff.

At the time it was released, this car was actually pretty well received by the press and the public. Magazines liked it for the most part, and so did owners (rather similarly to the PT cruiser). All told, they did make more than twenty four thousand of them, so they aren’t exactly rare.

Reddit user /u/fac3 told me that, “I worked at Chevy during the summer in highschool around this time period and have driven most of the wacky things you’ve posted about. I have to say my favorite was the LS2 6 speed SSR. We used to take them out to lunch and race them since nobody was actually purchasing them. These trucks were properly fast considering the era, and got a LOT of attention on the roads. On the interior, there’s a little gauge that tells you how much torque you’re using at any given moment.” Neat.

Some of these details are adding up into high used prices. The Boomer Car Collector Syndrome (BCCS) is strong with this one. Also, I don’t think that anybody, you know, really wants these cars. The owners of these vehicles therefore, will know what they have, and will not be low-balled. If you came to kick tires, you will find you are not welcome. Lets just fire up Autotrader and do a quick search.

There’s about six trillion of these cars for sale with less than five thousand miles on them, and they rarely get below $15k asking price. In fact, I haven’t seen any below ten grand. Some of them are above $40k, which frankly leaves me completely speechless.

Also, I know a lot of you guys have no interest in buying these, so do yourself a favor and don’t even browse through them online. There’s so many horrible paint jobs, chrome wheels, flames… Really once you look at them, you start to enter the mind of the people who want to buy them, and it’s just not a great place to be.