The Chevy Malibu was a very normal car for GM. Sharing the Epsilon platform with seven other cars (not including the extended wheelbase vehicles), it was a mid-sized, front-wheel-drive sedan offered with a 2.2 liter four cylinder, or 3.5 liter six cylinder. It initially had a center chrome strip along the entire front fascia. 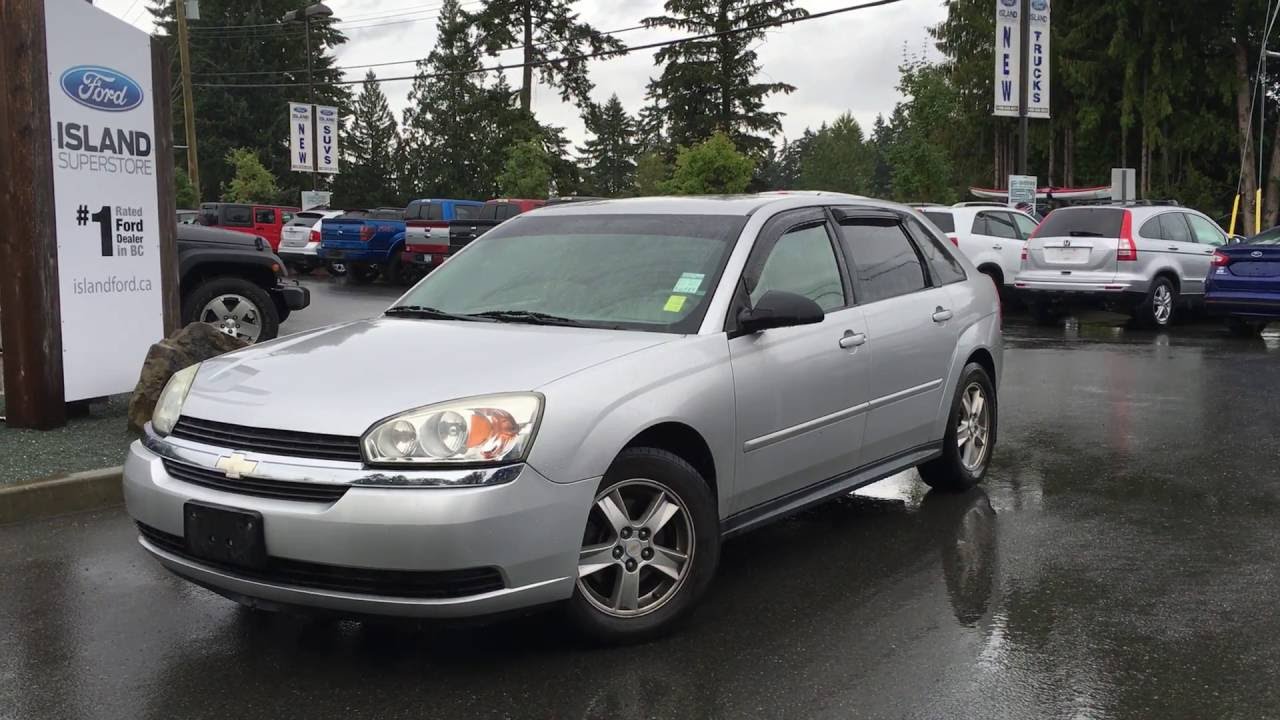 This was to make it look more like GM’s trucks, because they apparently believed this was the secret to their impressive sales. It was thankfully removed when the Malibu was facelifted.

The Malibu came in either a regular sedan variant, or a very strange looking hatchback called the Maxx.

The rear end of the Maxx looks… uncertain of itself. I’m guessing they stopped the roofline a few inches short of the rear fascia so they could use the same taillights as the sedan. Interestingly, the Maxx could be had with not one, not two, but three sunroofs.

Each rear passenger got their own ‘skylight’, that could be obscured with a sunshade. I say ‘skylight’ because they couldn’t open. The rear seats also slid back and forth, and reclined, with a choice of three positions. With the nicer upholstery options, the back seat of this car was probably the best spot in the house. The center armrest looks pretty soft–nice and wide. The rear legroom was measured at 41 inches, only two inches shy of a new S-class Benz. This would probably make a great Uber or Lyft car, actually.

According to /u/AlecPresti on reddit, I am correct in assuming this!

“As somebody who has owned two of these beauties, I can say it’s surely a quirky, yet lovable, little car. I did over 1000 Lyft trips with my Maxx and I can confirm it’s quite a great car for it! Passengers loved the skylights and “limo-like” legroom in the rear. Flat-folding seats (including the passenger seat) made it a great camping car and transport vehicle moving in and out of college. It definitely had its headaches with the abysmally daft 4-speed and intermittent cut-out of the electric power steering, but I surely will miss my Malibu Maxx.”

In 2006, of course, this car got an SS trim (along with the sedan). As usual, GM would not just add some red plastic and write SPORT or RS on the car. *Sigh* no. Everything needed performance parts.

The facelifted Maxx is a considerably better looking car than the pre-facelift version, which isn’t really saying much. Considering the strange rear ledge before the taillights remains in all its glory, the exterior still manages to look like an inexpensive clock radio.

The car got new more aggressive front and rear fascias, side-skirts, a spoiler, and some new five spoke alloy wheels. I suspect these are the exact same wheels offered on the Cobalt SS, but halfway through trying to find out if they were the same, I realized what I was doing, and passed out from boredom. Knowing GM, they probably are.

Mechanically there were a series of improvements. The car got a 3.9 liter, iron block, 240 horsepower V6 engine. GM shared this with a series of other vehicles, most notably no other car worth mentioning. Interestingly, it had a variable length intake manifold.

That’s probably the most exciting part of this car.

This bumped up the horsepower by a stunning 23. Any Malibu you got came with a four speed automatic transmission, and this remained the same for the SS. You did, however, get ‘tap up-and-down shifting’. Considering the most you would ever hit this button would be exactly twice, I’m not sure why they even bothered.

This whole car can be defined by the phrase, “I’m not sure why they even bothered.”

The suspension was ‘Sport tuned’ (the original brochure for the car offers no details on the changes), and the exhaust was glamorized with two chrome tips. Inside, you got sportier seats with more aggressive bolstering, a new three-spoke steering wheel, and chrome trimmed gauges.

“The actual tuning difference between a regular Malibu (which could be fun if you pushed it and didn’t care, surprisingly), and the SS was actually pretty complete. It wasn’t just lower, but it had better spring rates and different dampers. The tires were way better. And, my favorite part, the steering. The regular Malibu had newer more efficient electronic power steering, but I remember that the SS used hydraulic power steering, and the steering feel was soooo much better for it.”

So if you’re gonna get a Malibu Maxx to drive… I guess go for the SS?

The one surviving review from Car and Driver comes to basically no conclusion, so this car is likely about what you expect it to be. I think they made plenty of them, the actual production numbers were hard to track down. Doesn’t really matter though, because you can get them pretty consistently for about four grand. A lot of them go as low as $1k, and nearly all of them have at least 100k miles on them.